I have been consulting on variations of a deployment strategy and use case that involves CAS acting as an identity provider while also presenting the ability to delegate authentication requests to an external identity provider and act as a proxy in between. I had the erroneous assumption that client applications integrating with CAS in proxy mode must be those that speak the CAS protocol. This meant that while CAS itself may delegate authentication requests to a variety of identity providers that speak SAML2, OAuth2 and CAS protocols, etc the client application that ultimately would receive a response from the proxying CAS server can only understand a service ticket and the particular validation payload compliant with the CAS protocol semantics.

This post is an attempt at explaining my rationale with a follow-up explanation of why I was wrong.

The normal flow for delegated authentication is something like this: 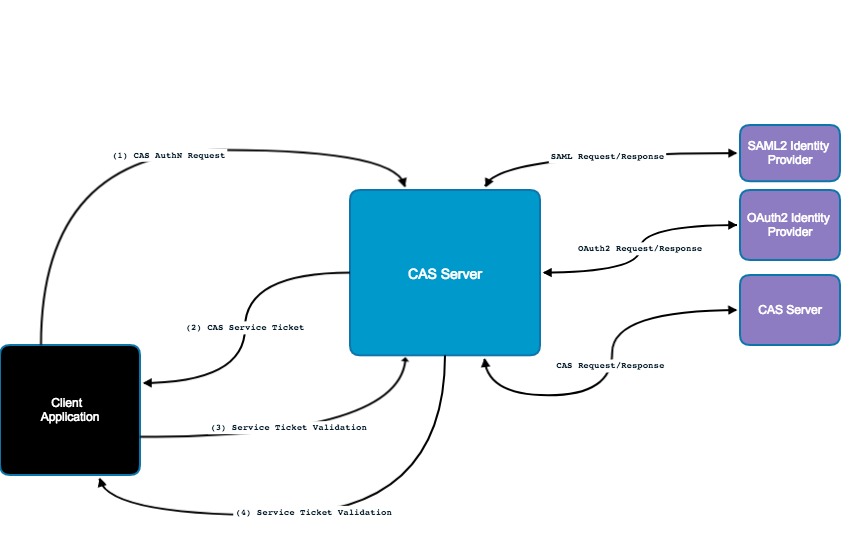 Once the response is processed by the external identity provider, note that the opinion is built into the CAS authentication flow to assume the next steps to be “creating a service ticket” and “redirecting back to the calling service/application with that ticket”; details which are dictated by the CAS protocol and obviously no longer apply if the client application is a SAML SP or OAuth2 client.

If the client application were to submit an authentication request using a protocol other than CAS, it would be only fair for the application to expect a response using the same protocol. But, how could it ever work with the CAS server always issuing service tickets and 302-redirecting back to the application?

It turns out that given the CAS design, client applications can speak any type of protocol that CAS itself supports today regardless of the authentication flow. For better or worse, this feature has to do with how secondary protocols (those other than CAS itself) are implemented.

All other authentication protocols supported by the CAS server happen to be clients of the CAS server itself. The SAML2 module, OAuth2 module and anything else supported in CAS accept the original authentication request at the relevant endpoint, then route that request to the CAS server turning themselves into individual tiny CAS clients. At the end of the day and just like before, the CAS server creates a service ticket and issues a request back to the calling application, which in this case happens to be itself and the relevant endpoint inside itself that is to going to pick up the request and resume.

Let’s start with a client application that speaks SAML2. This client is configured in CAS as a SAML2 service provider, while CAS itself is proxying Facebook as an external identity provider.

This is a bit of a complicated scenario since you have about three protocols dancing together. The effective flow would be:

The trick, if I could re-emphasize, is noting that all protocols are clients of the CAS server that interact with it using the CAS protocol. This is done at the request/browser level, as opposed to doing things internally via heavily customized webflows and such that would be entangled with one another. The protocol modules that exist in CAS make zero assumptions about the internal inner workings of the CAS authentication flow/engine. They treat it just like they would an external CAS server; the only difference is, they sit and live inside the CAS server directly and yet they remain completely agnostic of that fact. Simply put in our example, the SAML2 module basically says: “this incoming request needs to be authenticated. So I’ll route it to a CAS server for authentication and when it comes back, I’ll do my bit”.

This surely continues to maintain SSO sessions as well for all follow-up requests, because the CAS server does not care about the calling party; whether external or internal, the SSO session will be established and available for everything else.

More notes on the design are available here.

Remember; the client originating the authentication request can use ANY protocol supported by CAS, so long as CAS is configured to accept and recognize that protocol and regardless of whether CAS is acting as a proxy or directly authenticating the user via its own internal data stores.