Continuing with Apereo CAS thriving in a containerized world for deployments, this tutorial begins to demonstrate a quick walkthrough on how a CAS container can be deployed and managed by Kubernetes. While a brief introduction of Kubernetes and the surrounding development environment is presented, the main focus of the post is to outline the tricks and tips expected of a CAS deployer for a successful cloud-based deployment.

Kubernetes (K8s) is an open-source system for automating deployment, scaling, and management of containerized applications. It groups containers that make up an application into logical units for easy management and discovery, and over the years, it has become quite the popular choice and mainstream for container orchestrations.

The easiest way to start experimenting with Kubernetes is via Minikube. This is a tool that implements a local Kubernetes cluster on your desired OS of choice and its primary goals are to be the best tool for local Kubernetes application development and to support all Kubernetes features that fit. For this tutorial, we will be using a Minikube instance to get Apereo CAS, as a Spring Boot application at its core, deployed as quickly and comfortably as possible.

You should first begin by producing a CAS Docker image, to be deployed into our Kubernetes cluster. To move things along quickly, I have already produced a self-contained CAS image that can be used for demo purposes. The image presents a CAS server, backed by an embedded Apache Tomcat instance, and is configured to respond to requests on port 8080 to keep things as simple as possible:

To successfully set up a Kubernetes cluster, you do need to have Minikube installed for your OS. I did follow the instructions posted here for Minikube on MacOS and while the process was relatively simple, I did have to account for the following gotchas:

With the above notes in mind, installing Minikube should be as simple as:

You can try to verify the state of your installation via:

Next, you should be able to start the local cluster via:

You can always examine the state of your cluster using the dashboard:

Our business with the Minikube local cluster is facilitated by the command-line tool Kubectl. This tool allows you to verify and manage the state of your cluster. For example, you can ask for the cluster information and details using:

Once you have a running Kubernetes cluster, we can deploy our containerized CAS server on top of it. To do so, we need to create a Kubernetes Deployment configuration. The Deployment instructs Kubernetes on how to create and update instances of CAS. Once you’ve created a Deployment, the Kubernetes master schedules mentioned application instances onto individual Nodes in the cluster.

A Deployment, in the Kubernetes vernacular, is responsible for creating and updating instances of our CAS server, keeping them running across Nodes Once the CAS server instance is created, a Kubernetes Deployment Controller continuously monitors that instances for failures. If the Node hosting an instance goes down or is deleted, the Deployment controller replaces the instance with an instance on another Node in the cluster. This provides a self-healing mechanism to address machine failure or maintenance.

To begin, let’s recall our current collection of nodes:

If you remember, we do have a self-contained CAS image and the would-be running container based on that image operates on and exposes port 8080. So, we should be able to describe our container to Kubernetes to run and deploy our application in the cluster using the Kubernetes YAML syntax; To avoid having to look at or edit YAML, we can ask kubectl to generate it for us.

To create a deployment descriptor, we can use the following:

Let’s examine the deployment.yaml file to see what we can work with:

You can see the deployment descriptor listing details about how the container should run, how port-mappings should be handled, etc. Note also that the descriptor is broken down into two categories: The Deployment section and the Service section each of each are distinguished using the Kind flag. In summary, this will allow our CAS deployment to be managed and deployed as a Service in Kubernetes.

Next, let’s check to see if our CAS deployment is running:

Be Patient
You may need to execute the kubectl get all command a few more times until the pod shows its status as "Running".

Back in the dashboard, you should be able to see the deployment running in all greens: 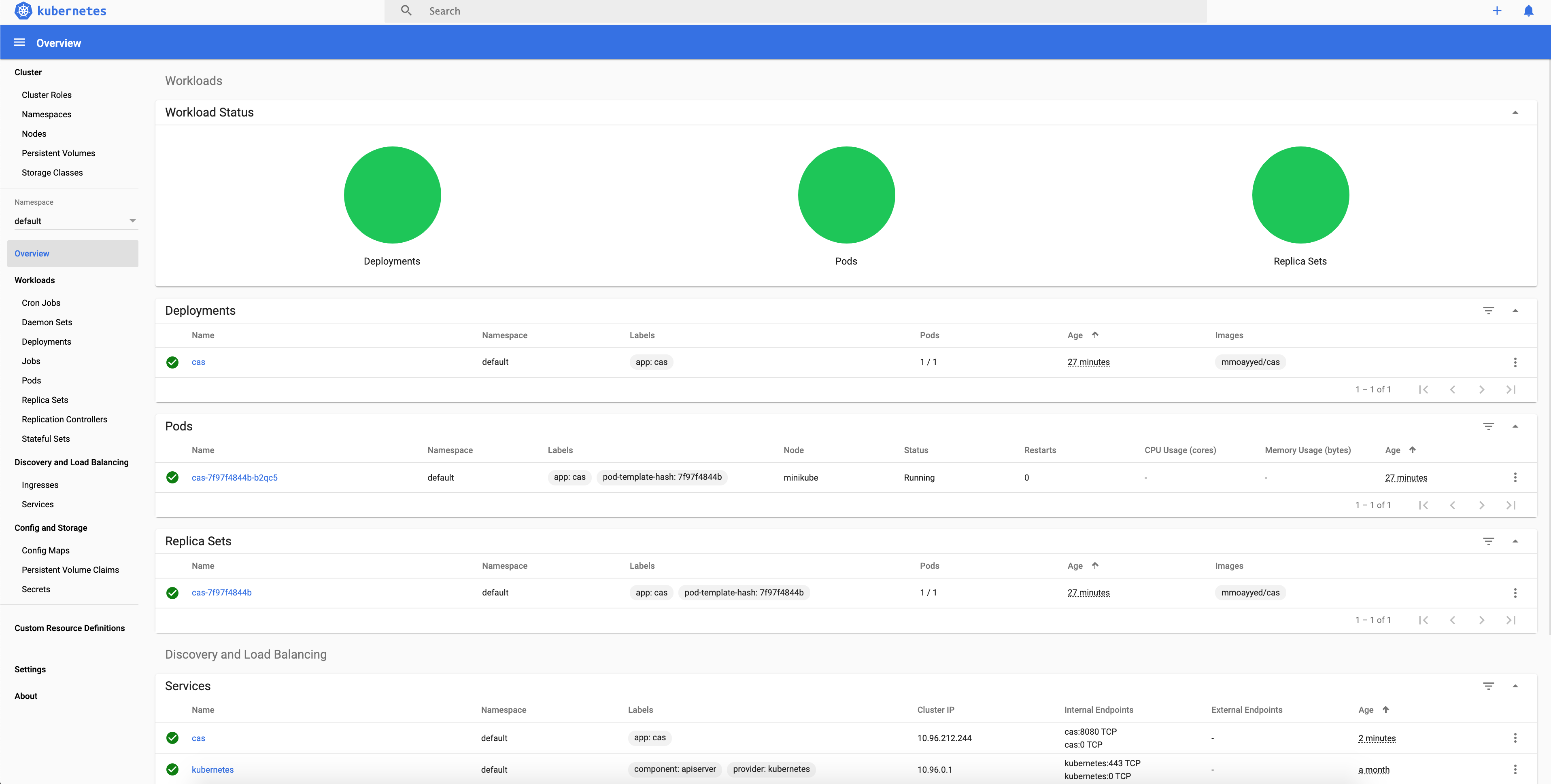 Now you need to be able to connect to CAS which is exposed as a Service in Kubernetes. We can use kubectl port-forward which allows using resource name, such as a pod name, to select a matching pod for port-forwarding. Let’s find our CAS pod first:

…and lets establish an SSH tunnel to that pod via:

…and voilà! our CAS server container is available under http://localhost:8080/cas/login:

We could also create the same tunnel using a Kubernetes deployment reference:

…or by referencing our Kubernetes service:

If you have questions about the contents and the topic of this blog post, or if you need additional guidance and support, feel free to send us a note and ask about consulting and support services.